Yew - Taxus species
Yews are evergreens distinguished by their vibrant dark green texture and broadly pyramidal habit. They tolerate severe pruning and are often maintained as shrubs but can live for hundreds of years, growing slowly and attaining the stature of trees. In middle age, the stems become muscular with handsome reddish gold coloring beneath the brown bark scales.

Longevity
Yews are so long-lived that individuals of great age in Great Britain and Europe are known by name. The Llangernyw Yew in Wales is believed to be 4,000-5,000 years old, surviving from the Bronze Age.  The Fortingall Yew in Scotland and the Caesarsboom in Belgium ("Caesar’s Tree," in Dutch) are both more than 2,000 years old. These ancient trees are treasured as national monuments.

The oldest yews in Europe are almost all in churchyards. Chapels, complete with entrance doors, were laid out in the hollow trunks of ancient yews, with room inside one chapel in northern France for up to 40 people. 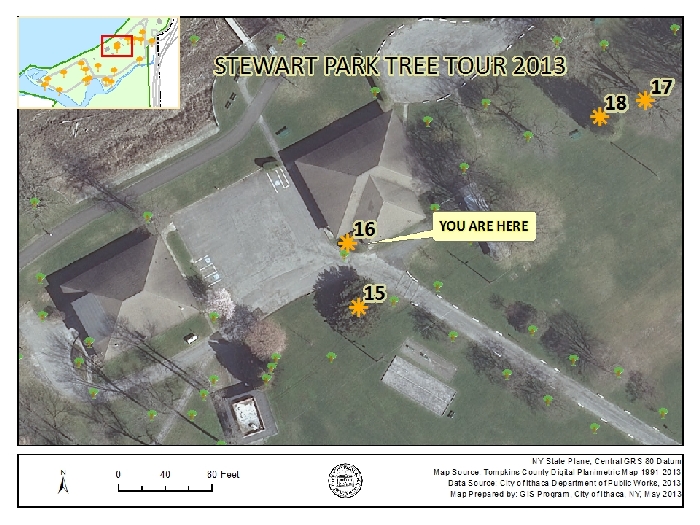 Toxicity
Contributing to their longevity is the fact that yew can split under heavy weight without succumbing to disease in the fracture as do most other trees. Another factor is the toxicity of yews. Most parts of yews are toxic - in fact the name "Taxus" is from the same root as "toxic" - so yews were spared the foraging of wildlife.

Although all parts of the yew plant are toxic except for the bright red berry surrounding the seed - with horses, pigs and cattle particularly vulnerable to yew poisoning - somehow the succulent new shoots of yew have become favorite browsing for the deer locally. The yews here at Stewart Park have just about outgrown the reach of the hungry deer.

Nonetheless, survival of very old yews is surprising, given the overharvesting of the 15-16th centuries in Europe when yew was the wood of choice for making longbows. So great was the demand for yew that a statute from 1472 decreed that every ship coming to England had to bring 4 bow staves for every barrel of wine; this was later increased to 8 bow staves for every barrel. Yew was also the prized wood for lute making. By the 17th century, no yew is mentioned in European forestry records.

Modern Yews
Although there are two yews native to North America, most yews used in landscaping in the U.S. are Taxus x media, a hybrid of the European Yew, T. baccata, and the Japanese yew, T. cuspidata, which combines the form of the European and the hardiness of the Japanese Yew.

The leaves and bark of yew are used medicinally as a source of the chemotherapy drug paclitaxel for breast, ovarian, and lung cancer. Yew was known in medieval times as a cardiac remedy; from it was derived the first calcium channel blocker, not in the medical mainstream until the 1960s.