Weeping Willow - Salix alba ‘trista’
Although often much maligned for its thirsty habits - often clogging water lines and drainage pipes when planted in the wrong locations - the Weeping Willow, Salix alba ‘trista’ is in reality a beautiful and magnificent tree when planted in a large, open space where it has lots of room to grow. Stewart park is in fact the perfect location for them  close to water and with lots of open ground - which is why you will see so many very fine specimens here.

The Willow is dramatic both in appearance and history. From the classic children’s tale "The Wind in the Willows," to ponds, rivers and streams around the world, few trees inspire so much imagination or add as much grace to the landscape as the Weeping Willow. According to arboricultural history, early in the history of interstate commerce, cuttings from this popular species were carried along the trade routes from its native China. It was the shade of a Weeping Willow that helped comfort Napoleon during his exile on the Island of St. Helena. After Napoleon was buried under his favorite tree, cuttings from it became a valued prize among his admirers worldwide. 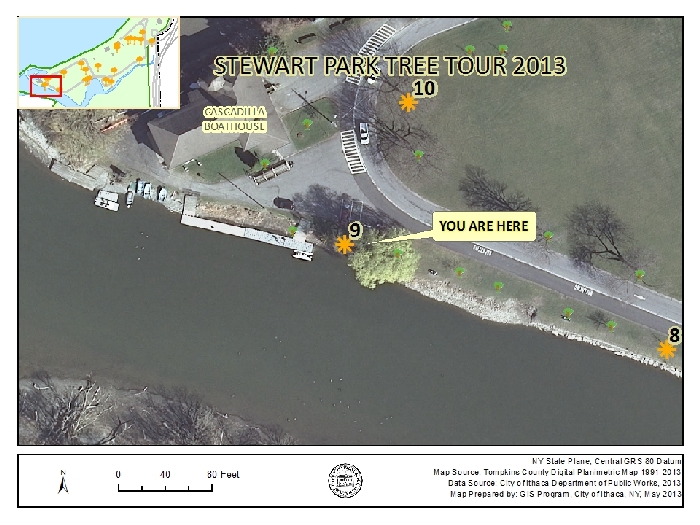 The Willow is a revered tree in its native land, associated with immortality and movement - used in rain ceremonies and thought to have inspired people to dance in Irish mythology. Certain relatives of the Weeping Willow are utilized for their medicinal properties and the mysterious persona of the Willows long, gracefully flowing branches made it a symbol of mourning and forsaken love in Victorian times. It is for this reason that Weeping Willow is often a tree you might find in graveyards and cemeteries around the globe.