History of the Ithaca Police Department

Ithaca became the 21st city in the State of New York in 1888. Prior to that it was an incorporated village and its police force consisted of a couple of village constables.

The City of Ithaca Police Department was established on June 1, 1888. The 1st city Police Chief was Albert Neideck, who had served previously as a village constable for the Village of Ithaca. Chief Neideck was appointed Chief of Police for the new Ithaca City Police Force on June 1, 1888.

The police station was housed in City Hall, located at East Seneca Street and North Tioga streets at that time. This building was built in 1844 as a village hall. It was the home of the Ithaca Police Department until 1963 and was torn down in 1964. Chief Neideck's force consisted of 4 city patrolmen whom were John Donovan, John Campbell, Richard Evans and Perry Robertson. Chief Neideck's weekly salary was $14 per week. John D. Conley served as Ithaca's 2nd Chief of Police from 1900 to 1904.

Eugene VanOrder was appointed as Ithaca's 3rd Chief of Police in 1905. By 1906 Chief VanOrder's department grew to 9 full time Officers. Chief VanOrder left the force in 1909.

Edward Buck served as Chief of Police until December 30, 1915. 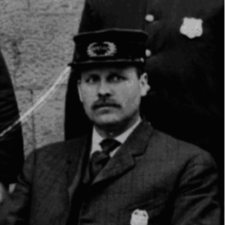 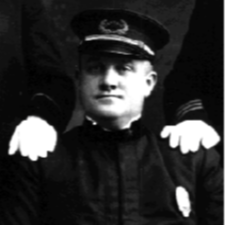 Chief Marshall's administration saw the addition of the 1st police call light system some time in the 1920s. This system consisted of a blue light mounted on a pole or building in certain geographical districts of the city. Patrolman on foot and motorcycle patrol would monitor the call lights on their beats. If the light came on, the beat officer had 5 minutes to call the police station by phone. 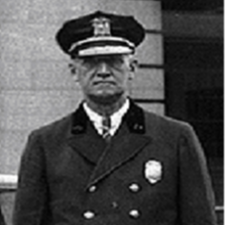 This method of communicating to officers on patrol existed until the arrival of the 2-way radio installed in the department's 2 radio prowl cars and 3 motorcycles in the 1940s. The call light system was used as late as 1969 as a method of communicating with patrol officers assigned to a walking post. The call light system became obsolete when the department purchased portable radios for its walking beat officers in 1969.


The Murder of Mrs. Alice Barnes

In the early morning hours of September 11, 1930 Chief Marshall and Detective Sergeant Hartnett commanded a detail of Ithaca Police officers and private citizens to the hilly area between Linn Street and University Avenue, where it was believed Barnes was hiding. Participating in that search was Patrolman Levi Spaulding. Barnes was eventually captured in the 300 block of Linn Street at 6:45 a.m. by Patrolman Ray Wilkinson following a foot chase. Following Barnes capture, he was placed in Patrolman Spaulding's police car and transported to the North Tioga Street Police Station (now the sight of the Seneca Street Parking Garage).

At approximately 7 a.m. Patrolman Spaulding was removing the handcuffs from Barnes, in the police station, when he handed the keys over to Sergeant John McCarthy and said "For God's sake, get me out of here", Patrolman Spaulding collapsed and was pronounced dead in the police station by the police surgeon. The cause of death was a heart attack brought on by the strain of the all night search. Spaulding was laid to rest on September 14, 1930. Spaulding an 11-year veteran of the Ithaca Police Department was also the 1st African American Police Officer hired by the department.

Chief Marshall retired in December of 1950. Chief Marshall served with the Ithaca Police Department for almost 46 years and as Chief for 35 years. He died in 1951, shortly after his retirement.


Ithaca Police Department in the Mid-Century 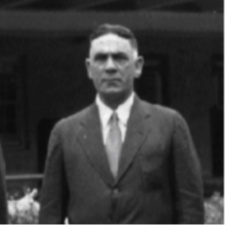 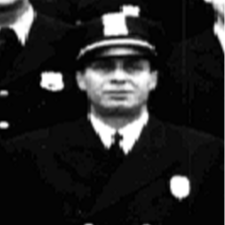 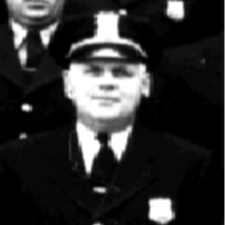 Deputy Chief Herson was named Ithaca's 7th Chief of Police in 1972. By 1981 the Ithaca Police Department grew to 60 sworn officers which included: the Chief, Deputy Chief, 3 Patrol Captains, 6 Sergeants and 8 Detectives. By 1985 the department was expanded to 66 sworn personnel. 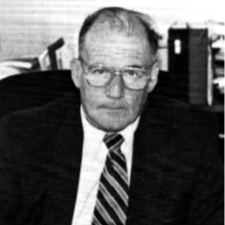 Walter Pagliaro was named acting Chief of Police July 1987 and served in that capacity until the hiring of Rochester, New York Police Captain Brian T. Page as Ithaca's 8th Chief of Police in November 1987. Chief Page served as Chief for only 6 months. He left Ithaca for personal reasons and moved back to Rochester in May 1988.

Harlin R. McEwen was appointed Ithaca's 9th Chief of Police in October 1988. Prior to that, he was Chief of the Cayuga Heights Police Department and Deputy Commissioner of the New York State Division of Criminal Justices Services in Albany, New York.

The Police Captains duties were changed from Patrol Division Shift Commander duties to Captain of Patrol and Administrative Captain. Chief McEwen led efforts to modernize the police department and increase police training.  He instituted community policing efforts to work exclusively in the south and west end of the city and opened a satellite police office at the Southside Community Center.  He also oversaw a major renovation of the police headquarters building that including moving administrative offices and building a new training room on the fourth floor of the building when Ithaca City Court moved out of the space and into the new City Court building next door.  By 1995 the department grew to 75 police officers including 4 Neighborhood Oriented Police Officers obtained via a federal grant.

Chief McEwen retired from the Ithaca Police Department in February 1996 to take a position as Deputy Assistant Director with the FBI. 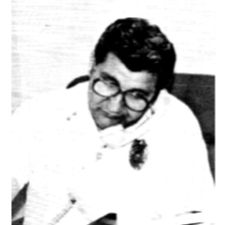 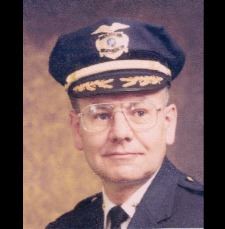 Richard P. Basile was named Ithaca's 10th Chief of Police on July 21, 1997. Chief Basile was formerly Chief of Police in Ellenville, New York prior to coming to Ithaca. Prior to that he worked for the New York State Division of Criminal Justices Services and was a Lieutenant with the Albany, New York Police Department.

Under Chief Basile's administration, the Department's first fully trained K-9 Unit and Tactical Services Unit were formed. The K-9 Handler for the department is Officer Raymond T. Schweiger. Officer Schweiger and his dog "Odin" were trained during the winter and spring of 1998 by the Onondaga County Sheriffs Department in Syracuse, New York. 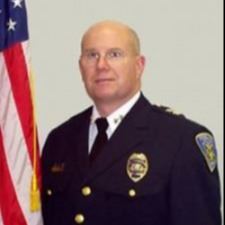 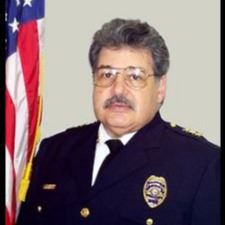 The Tactical Services Unit works closely with the Critical Incident Negotiations Team, The Special Investigations Unit, and the K-9 Unit. The Tactical Services Unit underwent a week of training June, 1998 by the International Association of Chiefs of Police whose instructors are current and retired members of the Los Angeles Police Department Special Weapons and Tactics Team.

Lauren Signer again took over at Victor Loo's exit from office in July 2004 and was named Ithaca's 12th Chief of Police in August 2004. She served as Chief until October 2007. During this time Chief Signer was responsible for initiating the IPD Recruitment Team, which for the 1st time actively searched out and aided recruits in the Civil Service process to become Police Officers. 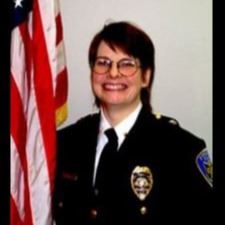 Senior Deputy Chief Edward E. Vallely was appointed as Acting Chief upon Chief Signer's retirement and became the 13th Chief of the Ithaca Police Department on November 24, 2008. Chief Vallely led the Department until his retirement on September 28, 2012.

During Chief Vallely's tenure as Police Chief the department saw many changes. The Department purchased a new mobile command vehicle, equipped with the most state-of-the-art features available. This new vehicle is utilized by the CINT Team, the SWAT Team, and serves as a mobile command center for critical incidents. It is the pride of the fleet of vehicles that IPD utilizes.

Chief Vallely led the department through a difficult time, as IPD Sergeant Bryan Bangs' house was burned to the ground in what Investigators have deemed to be an act of arson. An arrest has not yet been made for this horrific crime.

On September 28, 2012 Chief Vallely retired from IPD after nearly 35 years of service to the Ithaca community. 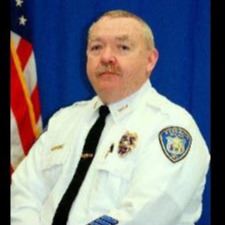 The Ithaca Police Department has undergone many changes since the original force of 4 officers and a chief in 1888. Today the 63 sworn officers of the Ithaca Police Department are better trained and equipped to deal with the myriad of problems that face them on a daily basis. However, over the past 115 years the mission of the police department has remained the same. To protect and to serve the citizens of Ithaca. 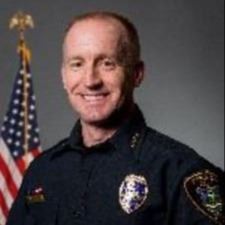 Upon Chief Barber's retirement Deputy Chief of Police Pete Tyler became the Acting Chief of Police of the Ithaca Police Department.  Acting Chief of Police Tyler was a very close friend with Chief Barber and the two shared many similar visions of what could make the department successful in it's endeavors.  Acting Chief Tyler rose through the ranks at IPD, starting as a patrol officer and working through Sergeant, Lieutenant and Deputy Chief promotions.  On December 20, 2017 Pete Tyler was permanently appointed to the position of Chief of Police.  Throughout his service as a police officer Chief Tyler placed emphasis on expanding the foundations of community policing, maintaining a well-trained police department, and enhancing the department's accountability to the Ithaca community.  Chief Tyler supported the police officers under his command and he supported the community's right to be served by a police department wrought with professionalism and integrity. 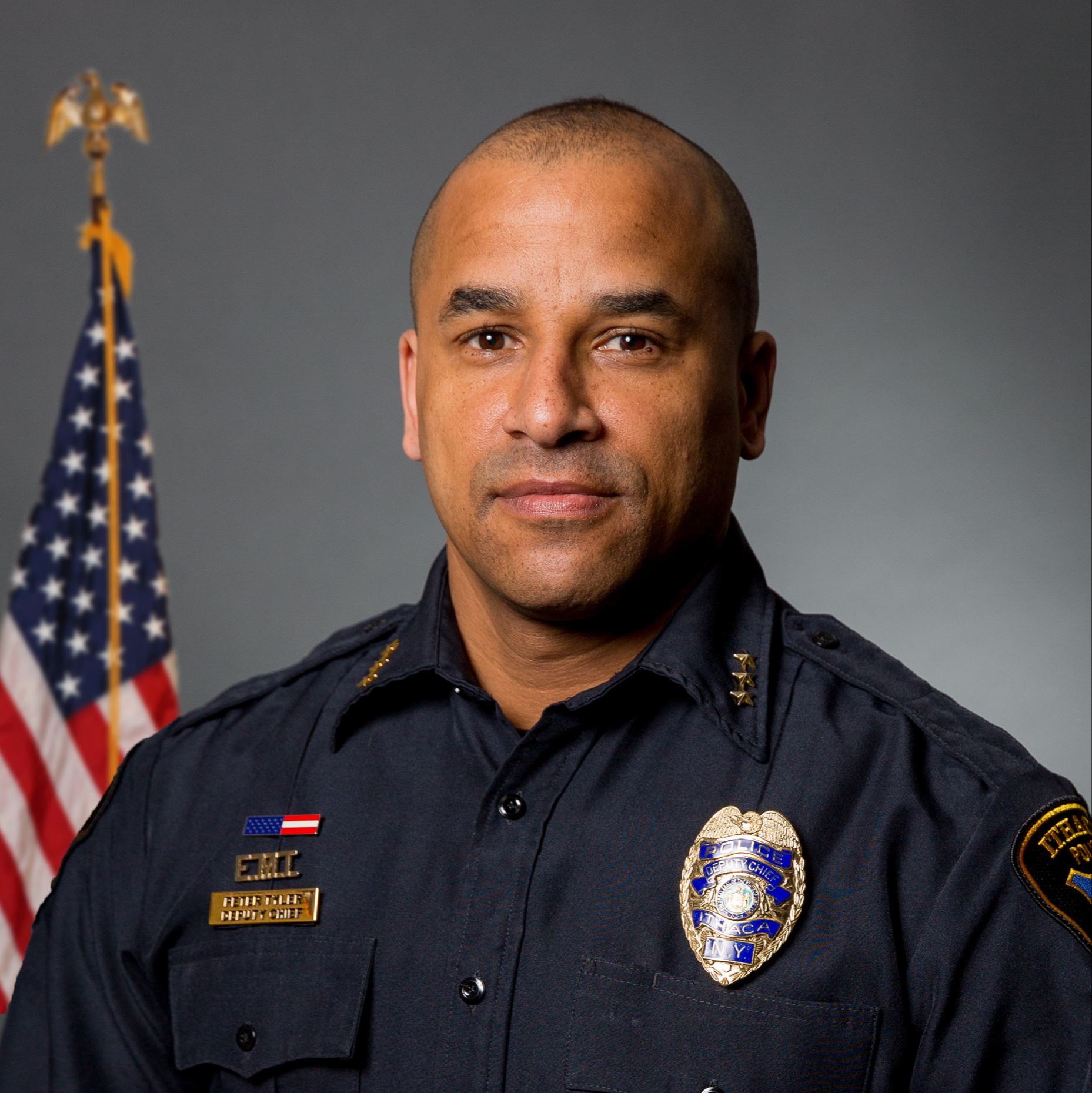 On September 27, 2019, Dennis R. Nayor was sworn-in as the permanent Chief of Police for the City of Ithaca Police Department.  Prior to this, he served for over 21 years with the City of Oneonta Police Department, Oneonta, NY, where he served in the capacities of patrol officer, DARE Officer, patrol sergeant, interim detective sergeant, lieutenant, and ultimately chief of police for nearly five years.

In January of 2017, Chief Nayor retired from the Oneonta Police Department to assume the role of Director of Research, Development, and Training for the New York State Association of Chiefs of Police.  In this capacity he assisted the organization in improving and advancing the policing profession while serving as a resource for all police chiefs and command level officers throughout New York State.  In his role, Chief Nayor focused his efforts on promoting the six pillars of professional 21st century policing by disseminating information and training that focused on: Building trust and legitimacy, education and training, social media and technology, community policing and crime prevention, policy development and oversight, and officer wellness and safety.

In realizing that he missed the mission of active law enforcement, Chief Nayor moved on from his role with the Chief’s Association to re-pursue a leadership role within municipal policing.  In September of 2018, Chief Nayor was recruited by Chief Tyler to serve as the Department’s Deputy Chief of Police in charge of professional standards.  In this capacity, he assisted in the overall leadership and advancement of the Ithaca Police Department prior to his appointment to Chief.

Chief Nayor holds a Master’s Degree in Law Enforcement and Public Safety Leadership (LEPSL Program) from the University of San Diego, a Graduate Certificate from the University of Virginia in Criminal Justice, a Bachelor’s Degree from SUNY Geneseo in Political Science, and an Associate’s Degree in Criminal Justice from Hudson Valley Community College. He is a graduate of the 240th session of the FBI National Academy and is also a graduate of the FBI LEEDA Command Institute.  For much of his career, he has served as an avid instructor in defensive tactics, firearms, physical fitness, DARE, and general topics.

Through a positive and progressive leadership approach, Chief Nayor strived to support the professional development of all members of the Ithaca Police Department, while building strong collaborative relationships within the community.  With an emphasis towards diversity & inclusion, professionalism, accountability, and quality police services, Chief Nayor passionately followed the six pillars of professional 21st Century Policing as outlined above.

After 25 years of dedicated public service, and after leading the Ithaca Police Department through the most challenging time in modern history, Chief Nayor retired in April of 2021. He was especially proud of having had the opportunity to be part of the City of Ithaca Police Department and serving alongside some of the finest officers in the policing profession. Upon his retirement, Deputy Chief John Joly was named Acting Chief. 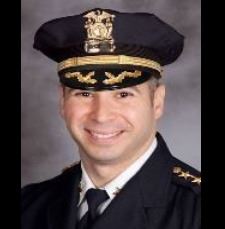